I attended the Muslim Ban protest at Detroit Metro Airport yesterday. It was one of several protests across the country and world. The local news channels were there, and I ended up on the evening news for a brief moment. That’s me at far camera right in the screen-cap below. I was uploading a video clip to Facebook that I had just made with my phone. 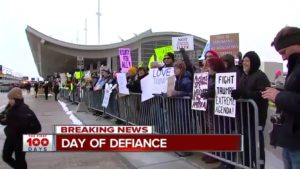 The protest was well organized and peaceful. I was shooting 35mm film, but still need to process it. I’ll post those in a future blog post soon. I also just processed some film from last weeks Women’s March here in Ann Arbor and need to get those scanned.  Stay tuned! =)

Here’s a short video from my iPhone: