On January 28th, 2017, protesters set out for airports across the nation to protest President Donald Trump’s controversial executive order halting all refugee admissions to the United States for 120 days, and which temporarily banned entry from seven Muslim majority countries.  One of these protests took place at Detroit Metro Airport (DTW) here in South East Michigan, which is not too far from where I live in Ann Arbor. It was a cold, snowy, and foggy day. I decided to attend with my camera in hand, in support of the protest.

I loaded my trusty Leica M2 with some Bergger BRF 400 Plus film. If you haven’t tried this film then I highly recommend it. It has a classic look with beautiful tones and grain structure. I rated the film at 800 ASA, and then push processed it 1-stop in the darkroom using Bergger’s BERSPEED developer.  BERSPEED was the only developer I could find that provided guidance for push processing at 800 ASA.  The developer uses a 1:1 working solution and is very easy to work with.  The only downside is the price at $25 + shipping for 1 liter of stock solution (2 liters working solution). Ouch!  I recently processed some BRF 400 Plus in Ilfotec HC (film rated at box speed) and it turned out nicely (future post coming soon).  Ilfotec HC is reasonably priced too.  I’ll have to do some testing of push-processing BRF 400 Plus with Ilfotec HC developer. 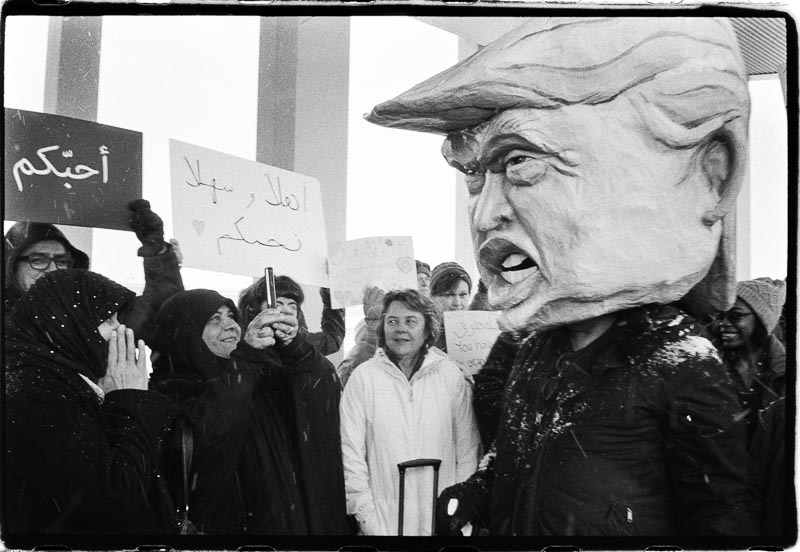 The picture above is my favorite picture from the day.  I saw the scene quickly falling into place with all its characters. The Donald Trump bobble head character was entering the scene from camera right, while the two ladies in the bottom left of the picture were taking a picture of themselves (“selfy”) with a mobile phone.  I could feel a good picture was coming together. He caught the eye of the lady holding the mobile phone and I saw her quickly preparing her phone to take a picture of him. She was smiling and seemed excited, which I thought was cute. I quickly focused, waited, and took the shot once “Trump” was where I wanted him in the frame.  As soon as I took the shot, I could NOT wait to get back to the darkroom to process the film! It was actually the very last frame on the roll, which I hadn’t realized until afterward. I’m so glad I wasn’t already at the end of the roll prior to the shot coming together. It wasn’t until later that I saw the expression of the lady in the middle of the picture, and the other lady whispering to her friend.  I didn’t know what the signs in the picture proclaimed, so I took to social media for some help. My friend Jennifer Aycock told me, “The black sign says ‘I like you’ or ‘I love you’. The white sign says Ahlan wa sahlan ‘welcome’ followed by the same ‘I love you’.”  Excellent!

Below are some additional pictures from the event: 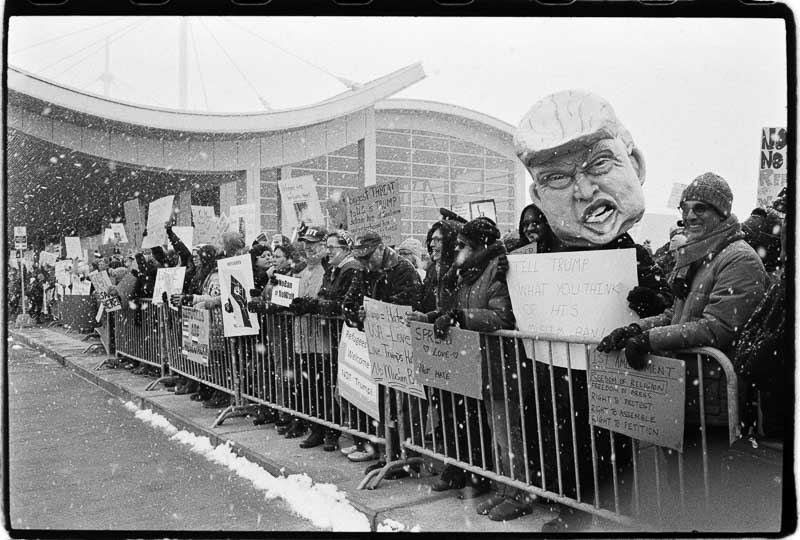 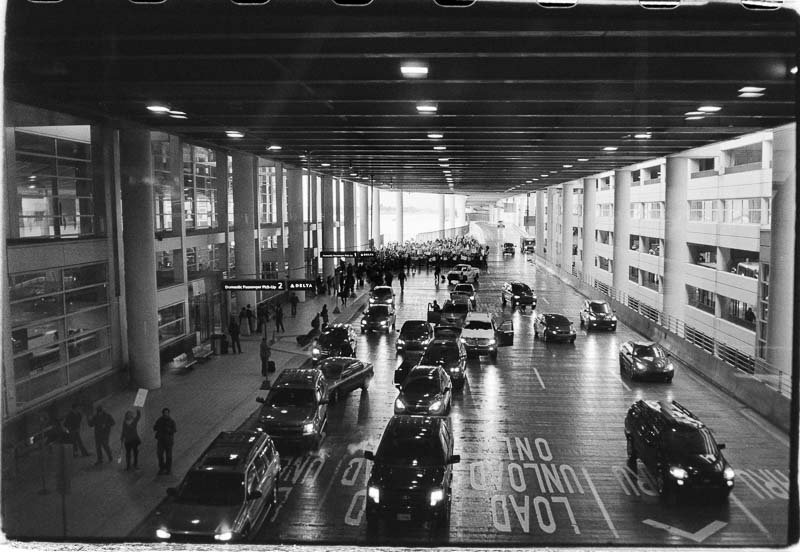 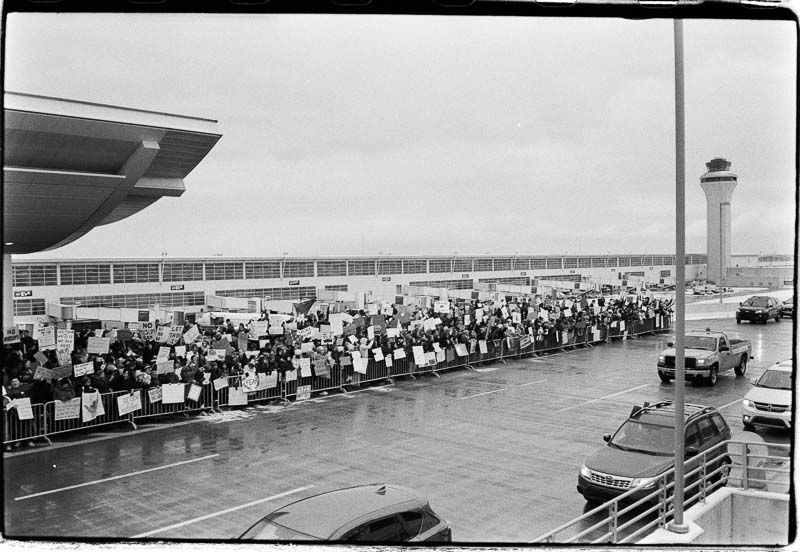 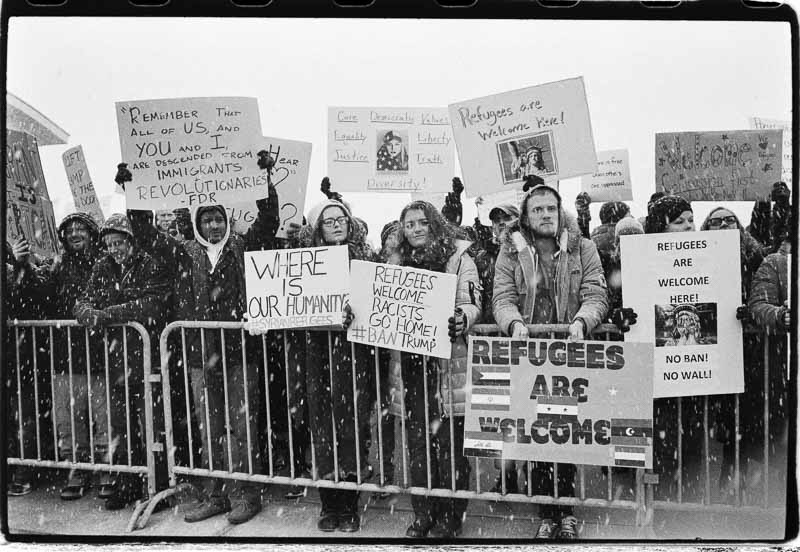 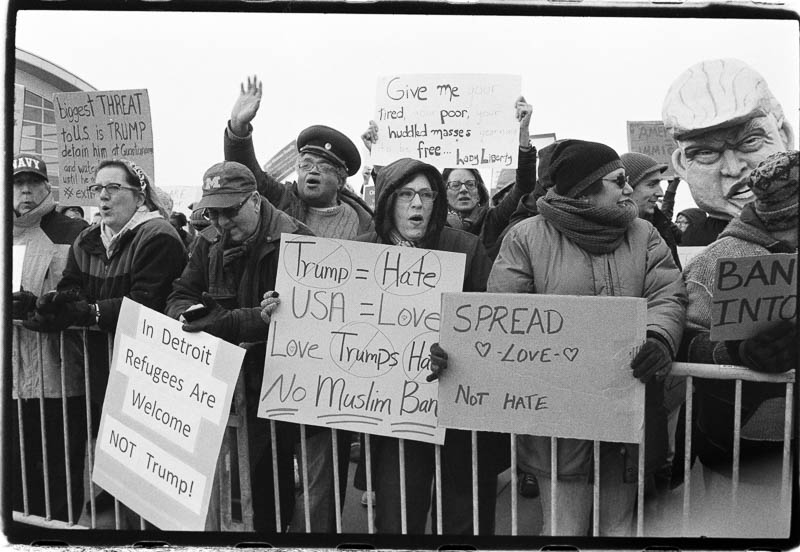 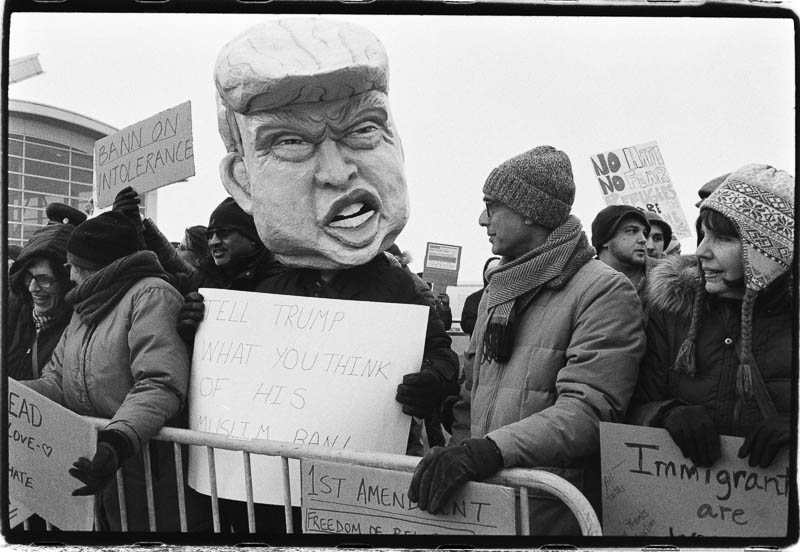 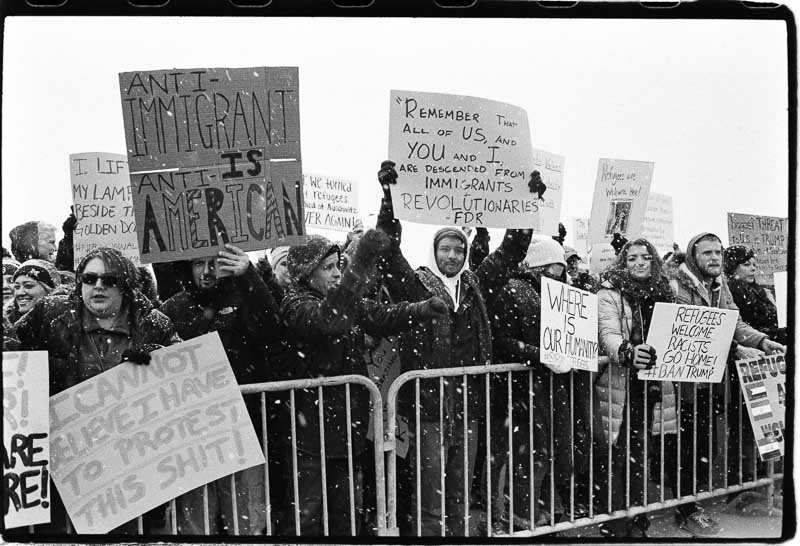 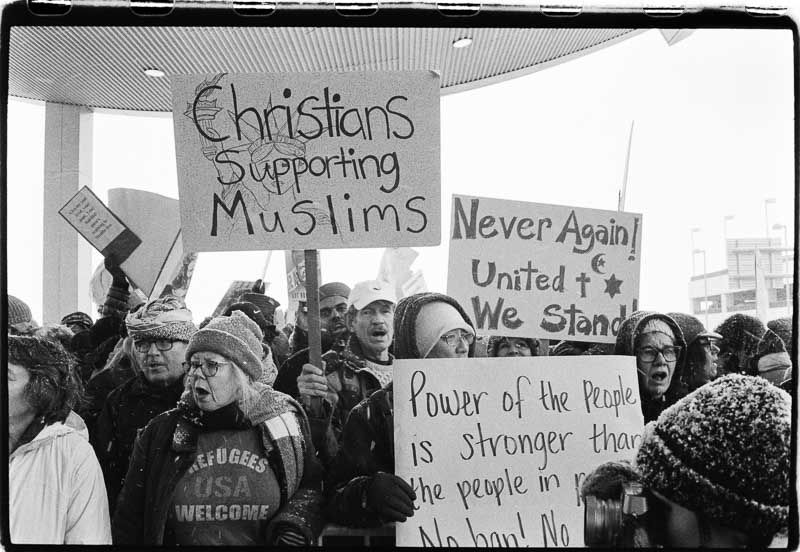 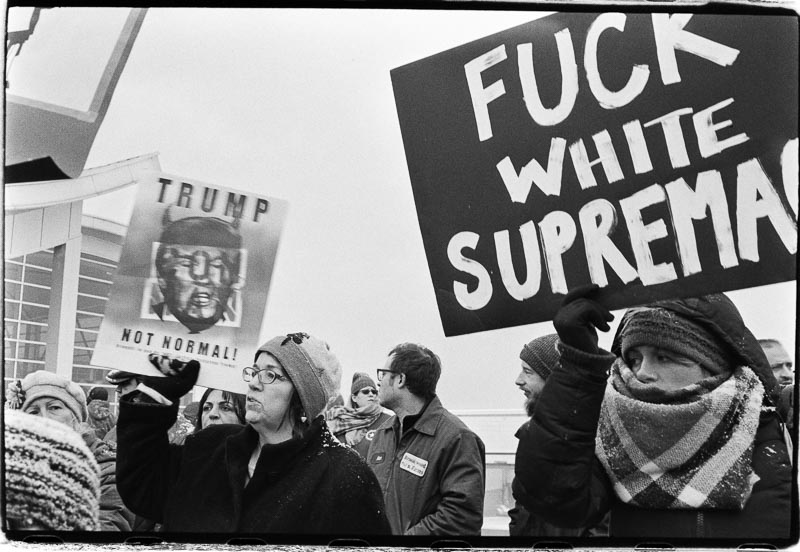 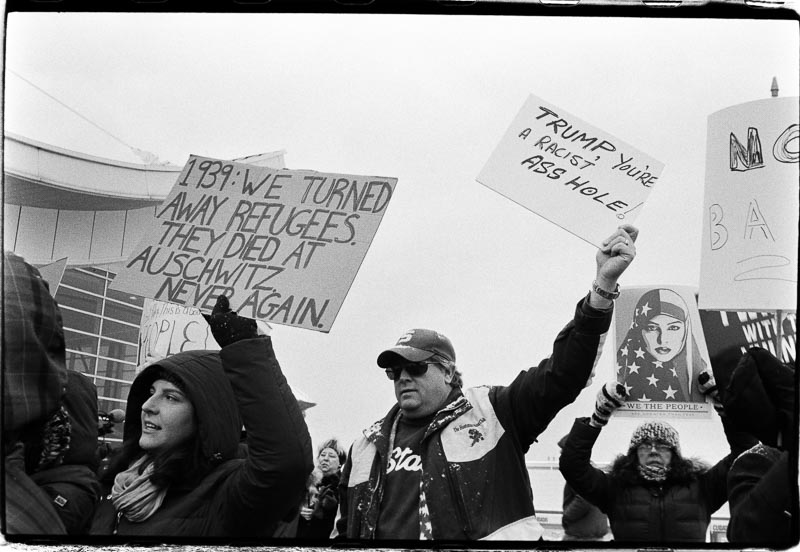 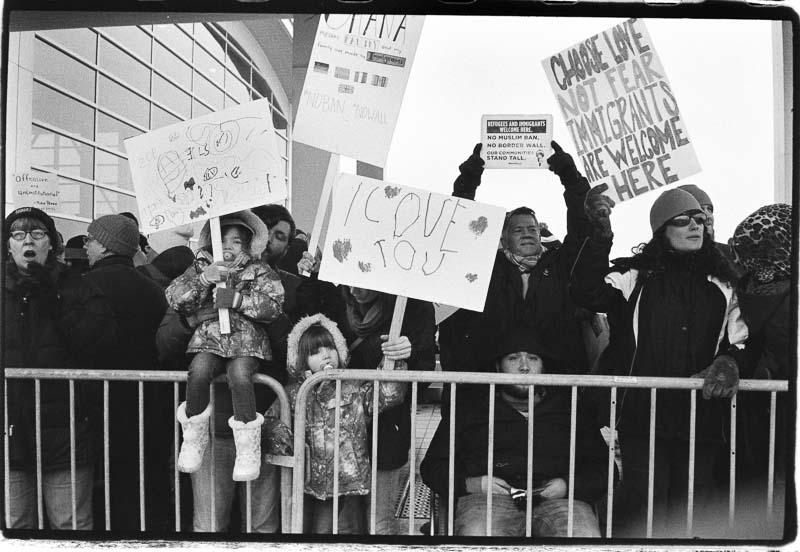 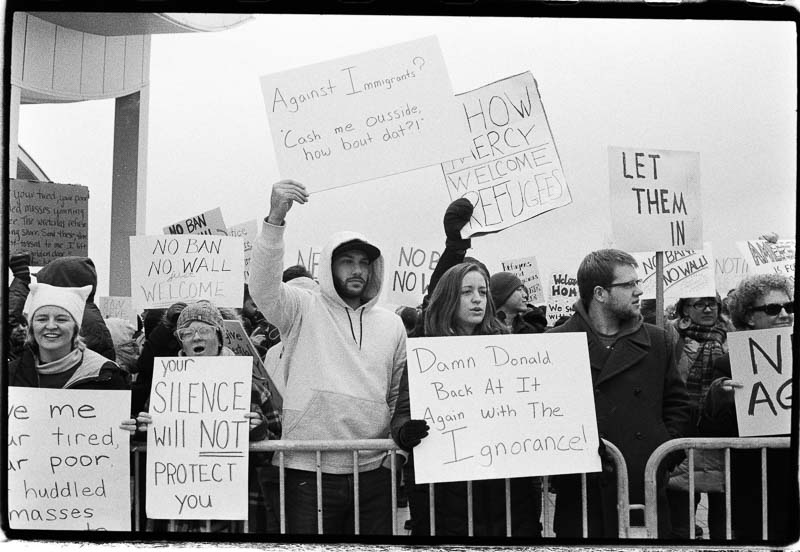 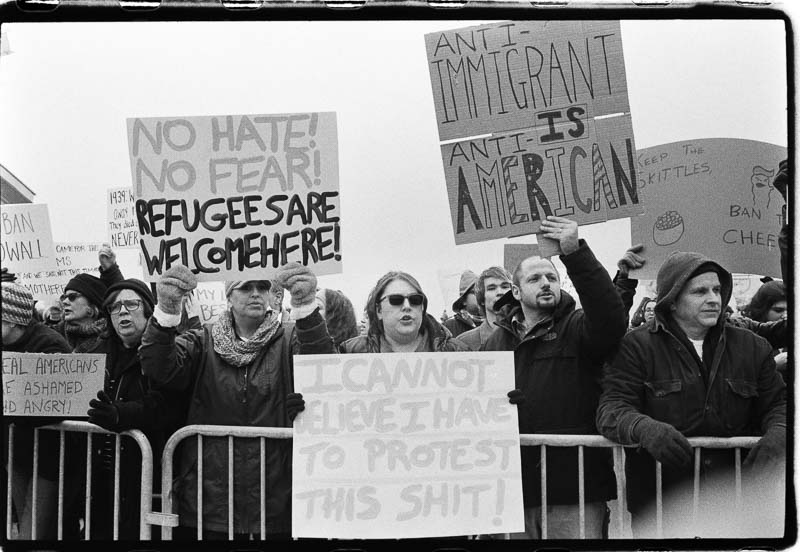 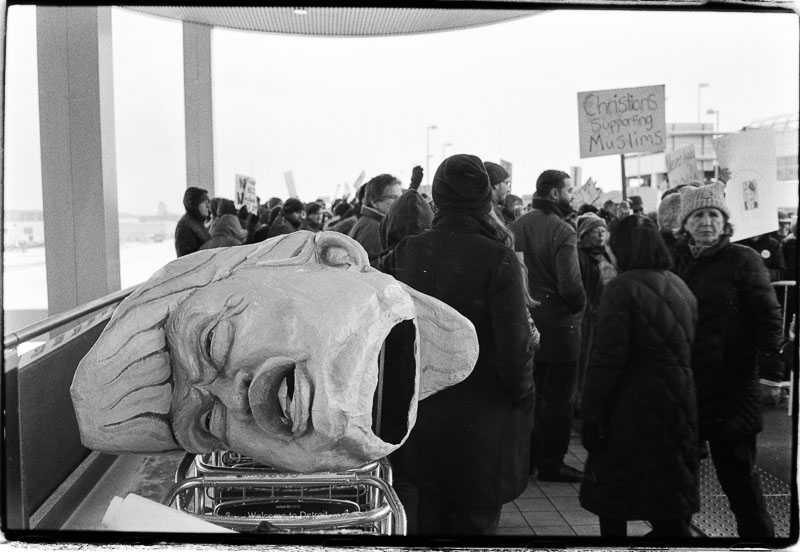